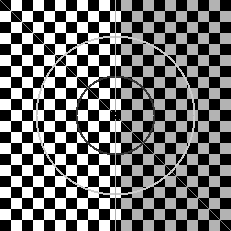 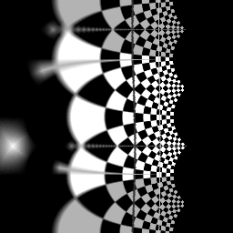 This paper investigates how phase correlation can be used to make a robust feature descriptor. It was later replaced by the LPM as a more efficient descriptor. Nonetheless, it introduces some important things like the fact that many implementations of the log-polar transform is not fit to be used for small images like feature patches as it does not sample from the centre. The image to the left is sampled in a log-polar fashion, with its centre in the small white dot in the central black pixel. The upper left image shows the result of using OpenCV, where the white dot appears like a dot and not a long white band as it should (as is seen on our method on the lower right). We tried many other Matlab implementations that we found on the web and some of them exhibited exactly the same behaviour, while others did not show the white pixel at all. We also sample on a disk rather than on a square to make the patch rotation invariant, using a 90 degree rotated filling order, which explains the difference in the right images.

The other thing this paper investigates is to use a Gaussian to be able to sample “between” pixels, by averaging together neighbouring pixels using the Gaussian.

Anders Hast received a PhD in Computerised Image processing at Uppsala university in 2004. In 2011 he spent one year at IIT, CNR, Pisa in Italy as an ERCIM fellow and after that he received a full time position as associate professor and in 2019 he became professor in image processing, both at Uppsala University. He has been affiliated with UPPMAX super computer centre where he worked as an application expert in Scientific Visualisation and later in the field of digital humanities together with the Centre for digital humanities in Uppsala. His recent research has focused on image processing and computer vision, for applications in microscopy, aerial photography, object recognition and especially hand written text recognition and face recognition. View all posts by Anders

This site is mainly dedicated to the research that I’m involved in. I hope you’ll find it interesting, even if the posts in the blog are mostly related to published papers.